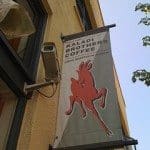 He promised to have policy legislation ready by the end of this month, but members of the audience at Monday’s meeting were not pleased with the result. Reporter David Griffith brings us more from City Hall.