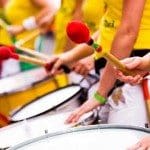 Check our listing of where to watch World Cup games in the Seattle area. Play in our World Cup bracket challenge league. Learn about Brazilian culture.

Occurring once every four years, the soccer tournament features 32 national teams, all champions of their continental qualifying competitions. Brazil is the host nation this year.

World Cup preparations are often dogged by controversy. The 2014 edition may prove to be among the most polemic of them all. Tune in to Music + Ideas throughout the tournament for unique perspectives on the political, economic, and social forces currently in play.

Join the KBCS World Cup bracket league and put your predictive powers to the test. After you sign up, search for the league ““Public Radio Champions.”

For your soundtrack to the World Cup, stream the KBCS Brazilian music program Raizes on demand, or tune in live Saturdays at 2pm.

Where to watch the World Cup in the Seattle area:

We recommend calling ahead to confirm hours, capacity, and availability. Use this form if you would like to suggest adding another venue.