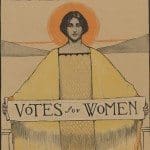 KBCS producer Yuko Kodama spoke with actress and historian, Tames Alan about the intersection of women’s fashion and politics in 19th Century.

Day 1
Tames Alan talks about fashion in the mid-19th century.

Day 2
History shows fashion and unequal laws weighed women down in the 1800’s. But determined women fought for their rights starting with their right to property. Tames Alan explains the intersection between the cloths women wore and how women were viewed.

Day 4
World War I had enormous influence on women’s rights. Tames Alan talks about how women’s roles in keeping a country going without a large portion of its men pushed them closer to the right to vote.

Day 5
1920’s fashion is said to be some of the most radical social expression of the 20th century. Tames Alan explains how flapper fashion was a political and social statement.