Education is not a crime 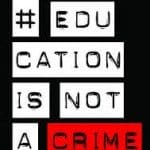 Baha’i’s are a religious minority in Iran. Since the 1979 Iranian revolution, Baha’i’s have been persecuted in Iran for teaching and studying. An international campaign, Education is Not a Crime, launches on February 27 to shed light on the plight of Iranian Baha’i’s. A documentary, To Light A Candle shows how Baha’i’s have defied the persecution to teach and educate their youth.Today I discuss the documentary and the campaign with local members of the Baha’i faith. Taraneh Mohajeri was born and raised in Iran. She left Iran in 1983 because she was not allowed to attend University. Houtan Rahmanian is a graduate from Baha’i Institute for Higher Education (BIHE) with a bachelor’s degree in Computer Science at 2008 (Tehran, Iran). He worked as a software developer a software company before Iranian government attacks and shuts down the company. He sought asylum from United States and moved to U.S. in 2010.

For more information about local film screenings of To Light a Candle and the campaign, visit Education is Not a Crime or Iran Press Watch.