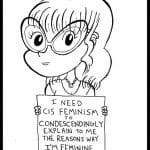 Caitlyn Jenner hit the cover of Vanity Fair with flair, inspiring public discussion on her journey in gender transition. KBCS highlights some of our local transgender community’s  day to day challenges in healthcare, public safety, and navigating our streets in this five-part series.

Episode 1 -Marlo Mack  is a mother of a transgender daughter and blogger.  Lisa Love is a Seattle Public School District Health Educator.

Episode 3 – Dannielle Askini is the Executive Director of the Gender Justice League.  Elayne Wylie is the Producer of TransPride Seattle.