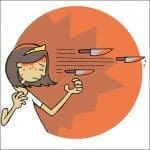 91.3 KBCS and the songwriters of Bushwick Book Club present a telekinetic evening of tunes about mean kids, crazy moms, and one young woman with badass super powers, inspired by the Stephen King horror classic Carrie, October 31st at Hale’s Palladium.

Grab a wrist corsage and join us for the prom-themed after party with Seattle yacht funk combo Richie Aldente.

91.3 KBCS and Bushwick Book Club present
an evening of original songs inspired by