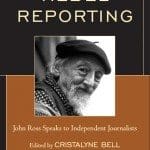 Words are weapons. And no one knew how to use words as weapons better than author, poet and journalist, John Ross. Ross toured the world and challenged students and thought leaders to be rebel reporters. What is a rebel reporter? Ross is no longer alive to explain the concept. But his words live on in a recently released collection of his writings, Rebel Reporting: John Ross speaks to Independent Journalists. The book explains the rebel reporting concept and provides examples of what it looks like in practice. Cristalyne Bell and Norman Stockwell edited the book.

Norman Stockwell works at WORT Radio in Wisconsin. He’s currently the Operations Coordinator but has worked in various roles at the station since 1983. Norman is on an international book tour. He’s in Seattle on Thursday, January 14, 6:00-8:00pm at Spinnaker Bay Brewing in Seattle’s Hillman City neighborhood.