Snowshoe Hares Predated For Wearing White Out Of Season 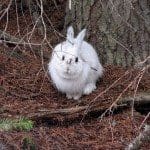 Easy pickings? A snowshoe hare in winter coat stands out before the snow falls.

A fashion faux pas could be the worst consequence if you wear the wrong color for the season. But a new scientific paper finds much higher stakes when it comes to mismatched coat colors in the animal world. Researchers are studying snowshoe hares in the Northwest against the backdrop of climate change.

Professor L. Scott Mills compares snowshoe hares to the “ice cream cone of the forest.” He says, “My carnivorous graduate student likes to calls them the cheeseburgers of the forest, meaning that they’re eaten by pretty much every predator out there.”

Mills says camouflage is the hares’ most important survival tool. The typical wild hare sheds its brown coat and changes to white in winter to blend in with the snow. Now remember warm winters like we had last year, how that could be a harbinger of the future under climate change? Mills and his team from the University of Montana and North Carolina State University wondered about the survival rates of snowshoe hares running around in white against brown backdrops. This could happen if a hare grows its winter coat before the onset of the snowy season and again in spring if the snow melts away before the change back to brown fur.

“We find that the cost of being mismatched is substantial. Every week that a hare is mismatched it has a seven percent lower chance of surviving than a hare that is not mismatched.”, says Mills.

According to Mills, if there’s any hopeful news here, it’s that hares display wide variation in the timing of their coat color molt. So the next question is whether through natural selection and evolution the animals can adjust to “decreasing winter.” Case in point, hares on Washington’s Olympic Peninsula and along the Oregon Coast have evolved to stay brown all winter.

“We used to think about evolution as being something that happened over geologic time,” observed Mills. “But biologists in the last 20 or 30 years have been stunned by how rapid meaningful evolutionary change can take place.”

Mills is a co-author on the study published Friday in the peer-reviewed journal Ecology Letters. Lead author Marketa Zimova is a doctoral student with Mills at NC State’s College of Natural Resources. Their ongoing research received support from the National Science Foundation and several divisions of the U.S. Interior Department.

Mills said the team is expanding its field work globally to other species that change coat colors seasonally. “We’re starting to study Arctic foxes in Sweden and mountain hares in Scotland and Ireland,” he said. Weasels and white-tailed jackrabbits also hold interest.

Since Mills relocated from Missoula to Raleigh in 2013, he has overseen the construction of a state-of-the-art research facility which includes several light and temperature controlled chambers – dubbed “Phenotrons.” One of these chambers is now populated by about a dozen hares captured in the woods outside Skykomish, Washington, and the other contains a similar number of snowshoe hares from Montana.

The chambers are currently set to mimic the daylight and temperature conditions of the critters’ home ranges. Excitement crept into Mills’ voice as he described the controlled experiments his team can now conduct.

“We can experimentally separate the influence of photo-period (length of daylight) and temperature to better understand the roles that those two might have in driving coat color change,” Mills said. “We can take little biopsies as the animals are undergoing the molt,” he said, to investigate the influence of genetics.

Until now, field observations have suggested the hares don’t modify their behavior much to reduce their vulnerability when their natural fur camouflage misaligns with the snow duration.
Snowshoe hares are widely distributed across the northern tier of the U.S. They can be found throughout the Northern Rockies, the Cascade Range from Canada to central California as well as in coastal forests of Oregon and Washington.