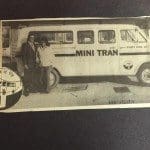 In 1966, the U.S. Congress passed legislation to initiate the Model Cities Program. The program was developed to address social and economic disadvantages among other things. In 1971, Seattle became a Model City. One of the programs funded was the Mini-Tran Project, a neighborhood bus system that served Seattle’s Central District residential neighborhoods. The bus system was initiated by then Central Area Motivation Project Director, and Director of the federally funded Seattle Model City Program, Walter Hundley. Yuko Kodama caught up with 92 year old Cecil Beatty, former Director of the Central District’s Mini Transit in his home to learn more about the system.