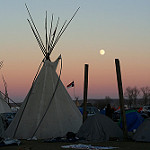 The Protest against the Dakota Access Pipeline ended in triumph over the weekend. We now turn to a personal story from Matika Wilbur, a northwest tribal member who was called to Standing Rock by the Sioux nation just a few months ago. KBCS Reporter Esther Dove John has more.