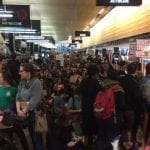 President Trump’s recent executive order, which restricts immigration from seven majority-Muslim countries, was met with widespread protest and confusion over the weekend. People who had just arrived in the U.S. were held at airports, and some were sent back out of the country, as Customs and Border Protection, activists, lawyers, and elected officials struggled to interpret the order’s implications. 7th District Representative Pramila Jayapal was working to get people released from Sea-Tac airport. Also at Sea Tac airport Saturday, Seattle city council member and activist Kshama Sawant led close to one thousand people in a protest. They voiced support for arriving immigrants and opposition to the ban. Listen to criticisms of the executive order, and find out what it was like for those who were protesting at Sea-Tac airport.