Ken Ward: The Man Who Shut Off Kinder Morgan’s Pipeline 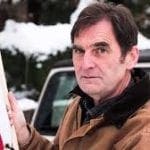 In a surprise victory last week, a Washington state jury refused to convict Ken Ward, the first of five so-called “valve turners” who shut off tar sands pipelines from Canada to Washington in October of last year. Ken Ward, who turned off an emergency block valve on Kinder Morgan’s Trans-Mountain Pipeline, was charged with two felony counts. After more than five hours of deliberation, Ward’s three day trial ended in a hung jury, with at least one juror refusing to convict. This feature is by local producer, Martha Baskin.