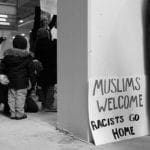 It’s been two weeks since President Trump signed an Executive Order banning immigration into the US from seven Muslim-majority countries. Kerning Cultures, a podcast highlighting the narratives from the Middle East, shared a segment with KBCS on the impacts of the travel ban on people from these countries. This Syrian-Canadian man, who is now hesitant to leave the United States, spoke with local Kerning Cultures producer, Hebah Fisher.