Unmute the Commute: A Methadone Ride 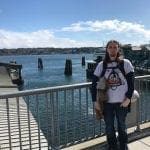 Public health officials have called the opiate epidemic the worst drug crisis in American history – with overdose deaths nearly tripling since 1999. About 50 years ago, clinics starting treating opiate addiction with methadone, or controlled doses of an opiate to slowly wean patients off of their addiction. On today’s Unmute the Commute, we ride along with a methadone patient. Story produced by Hans Anderson.