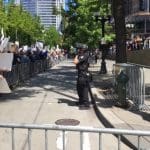 episiode 1 –  KBCS reporter, Andrew Perry interviewed people on the anti-sharia side of the scene and then posed the topics to Lawyer and Muslim Association of Puget Sound member, Aneelah Afzali. Afzali had organized a booth with a sign “Ask A Muslim”.  It was positioned directly across from the anti-Sharia protestors with others in the interfaith community as a resource to answer questions anyone might have about Islam or about Muslim culture.

episode 2 – University of Washington Director of Islamic Legal Studies and Professor of Law, Dr. Clark Lombardi explains what Sharia is.