The Aftermath of the Hurricane in Puerto Rico 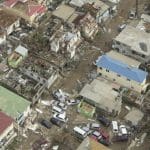 In late September, 2017,  Hurricane Maria, a category 4 hurricane ran its course through Puerto Rico. Rey Delgado is a local resident who traveled to Puerto Rico to help family and friends after the Hurricane. In this three-part series, Rey shares some of his experiences with KBCS’s Yuko Kodama.

Part 3 – Delgado shares his take on Puerto Rico and the US Government’s relationship.