KBCS Recognized for Excellence in Reporting 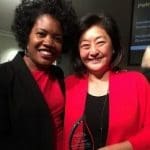 KBCS received an award on November 27th, 2017 for the Walter Cronkite School of Journalism 2017 Katherine Schneider Journalism Award for Excellence in Reporting on Disability competition. Listen to the two award winning segments of Dorian Wants Transit Policy Toward Disabled Persons to Change, highlighting the experiences of a wheelchair user as they use King County Metro’s bus system. Originally aired in 2016, both segments are a part of KBCS’s What’s the Flux?: Commuter Dispatches series. Sonya Green (left) and Yuko Kodama (Mona Yeh is also a recipient, but is not pictured)