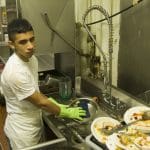 When we think of human trafficking, we may think of sex trafficking or something that happens in another country, but anyone who is forced to do any kind of work against their will falls in the human trafficking category. Human trafficking happens right here in our Northwest neighborhoods. Hao Nguyen, Human Trafficking Case Worker at API Chaya, sees these Northwest cases on a regular basis. This five-part series sheds light on the issue.

Part 4 – Hao shares how another woman, deceived into a life of domestic servitude by a married couple (who happened to be doctors), was able to get help