Repatriation of Mexican Americans in the 1930’s 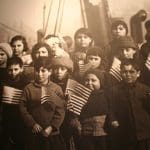 Imagine being a US Citizen and being deported to a country where you don’t know anyone. This happened in the 1930’s here in America.

In this two-part series, KBCS’s Yuko Kodama recently spoke with Dr. Gabriella Gutiérrez y Muhs, Professor at Seattle University, regarding the impact of the Repatriation program of the 1930’s.

Originally aired in 2017, KBCS features this series in recognition of Hispanic Heritage. It focuses on the history of immigration and repatriation of Mexican immigrants in the US.