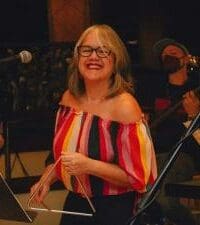 Born in Brazil of Italian/Uruguayan heritage, Adriana Giordano is a trailblazer on Seattle’s Brazilian music scene. She performs as lead vocalist for three Brazilian bands—Entremundos Quarteto, a jazz-based ensemble that deftly blends funk and soul with samba and bossa nova, En Canto, and Foleada, two ensembles that performs forró, the accordion-led music of northeastern Brazil. Adriana also enjoys collaborative music projects with local artists, such as the Quarantine Sessions. Through her company, Giordano Productions, Adriana presents concert series such as Seattle Interprets Jobim and produces special events, such as the Seattle Latin, Brazilian, and Caribbean Festival. For seven years, she has hosted the popular Jam Sessions at Capitol Cider on Capitol Hill, opening the evening with her Brazilian-based house band.

Adriana embraces her role as host of Brasilidade (“Brazilianness”) as an opportunity to introduce a new audience to the full spectrum of Brazilian music which, she says, “never fails to surprise people with its vast richness.” She also enjoys taking requests from local Brazilians and others already familiar with Brazilian music.