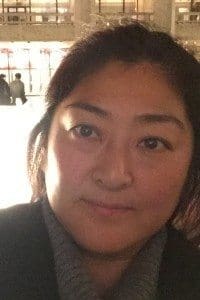 Yuko couldn’t go to sleep at night unless she listened to radio when she was growing up. She later found herself producing weekday segments for a number of radio stations in Japan, including J-Wave Radio, FM Yokohama, and ZIP FM.

Today, Yuko has over 30 years of experience in audio news and story production.  In 2017, she received a Walter Cronkite School of Journalism Katherine Schneider Journalism Award for Excellence in Reporting on Disability.   Her work has aired on All Things Considered and National Native News, and she was the Senior Producer of Listen Up! Northwest, a syndicated weekly program highlighting the work of community radio stations throughout the Pacific Northwest, British Columbia and Alberta, Canada.  She also taught broadcast audio production at Bellevue College for five years, and frequently mentors and trains students and volunteers in audio story production.

Yuko loves that radio is a medium that encourages the listener to use their imagination to participate in stories and art.  She also likes that listening to people’s personal experiences can inform and connect listeners to the humanity in others.