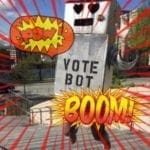 Phone banking parties come with themes like Harry Potter, where the film is playing in the background, or with a Destiny’s Child theme, featuring lots of their music and images of Beyoncé. KBCS’s Yuko Kodama interviewed Bridget Doyle Williams, who works for The Washington Bus, about the flavor of the organization’s election season “Get Out the Vote!” phone banking parties.