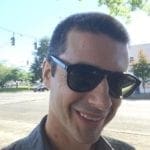 How long have you volunteered at KBCS:

I’ve been a volunteer music host since 2013, spinning rock and roll records in early morning hours for years before winding up at the Tuesday 11 p.m. slot with my current show, Nothing But ’90s.

What was the first song you played on KBCS:

What album do you own and love that would surprise your listeners:

A ten-disc vinyl boxset focused on the big bands and crooners of the 1940s. I blast enough alternative rock on the air and while preparing for my show; when I’m around the house, more often than not I’m listening to Benny Goodman or the Andrews Sisters.

What album changed your life:

Kid A by Radiohead. For late 90s alt-rock teenagers and young adults, this was the most hotly anticipated album ever. Word was Radiohead was changing everything. It leaked early on something called “the internet.” A friend of mine secured a copy from this mysterious “internet,” dubbed it to a cassette, and we all gathered around like the apes in 2001 to listen to what the obelisk had in store for us. And, somehow, it lived up to the hype—not by satisfying our desires, but by challenging our expectations. I doubt that I will ever be that excited by a new record like I was with Kid A. They stripped away basically all of the “rock band” b.s. and made a record that sounded like the future. It taught me an invaluable lesson about creativity. Real artists, the ones worth following for a lifetime, always push forward and never rest on their laurels—and there’s never been a less “resting on your laurels” record than Kid A.

Favorite KBCS Show (that’s not your own):

Chairman Moe’s 80s show on Wednesday nights. I love new wave, 80s indie and underground, postpunk, and good old-fashioned synthpop, and Moe has got me covered.