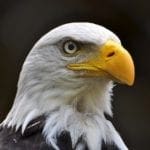 "Eagle" by Jeff Power is licensed under CC BY-NC-ND 2.0

Join KBCS’s Yuko Kodama and Ed Dominguez, Lead Naturalist of the Seward Park Audubon Center, for another stroll through Seattle’s Seward Park, as they encounter and discuss our national bird: the bald eagle.

“Eagle” by Jeff Power is licensed under CC BY-NC-ND 2.0

(Bird calling) So that sound that you’re hearing is one of our magnificent birds. And that’s the symbol of our country, that’s a bald eagle. Now Yuko you can’t believe Hollywood, when you see an eagle in a commercial on TV or in a movie or a TV program and they want to give a vocalization they always dub in the call of a red tail Hawk, which gives a very raptor menacing sound of peeer (imitating the call of a red tail hawk) a Hollywood dubs in red tail Hawk vocalizations because it has a much more menacing and threatening and powerful sound than the cheep cheep cheep cheep cheep (imitating a bald eagle call) which kind of sounds a bit like maybe a squeaky hinge on the door, but that’s our bald eagles main vocalization. And as I see just one bald eagle there, it’s probably calling for its mate, probably saying “have you had any good luck fishing, bring it on over so we can share.” These two bald eagles. This is their territory here on the Montlake Fill, and their nesting tree is just across the water at the Broadmoor golf course. Next to the Broadmoor, it’s a fenced gated community, and they have a big tree right on the north end of the golf course that has a nest that they’ve used for many, many years successfully with new progeny and new Eagles for our area.

I guess, is it normal sized or just much bigger than usual?

Yes, that’s normal size in the raptor world. We have what’s called a sexual diamorphism. which is just as a fancy way of saying that males and females have different sizes. And in Raptors like these bald eagles, the females are always the larger bodied bird. The females need to have the larger body size because they’re the ones that sit and incubate the eggs, of course, regulating their temperature and protecting them from predators and then when the the young Raptors hatch, it’s the female that’s primarily responsible for sitting on them, giving them cover, temperature regulation, and protection, the male does most of the hunting and feeding of the young and of the female on the nest, so he doesn’t need to have this larger body. The female though, needs that body for all of the body mass to be able to cover and protect the eggs and the young. So if you see two Eagles side by side, it’s probably a mated pair and the larger the two will be the female. And I think that’s what we’re looking at, here Yuko, that’s a nice sized eagle, so it’s probably the female sitting in the tree and looks like she’s doing some preening and grooming and putting oil on her feathers to keep them in top condition and the male i think is just off to the northwest. I see a bird way in the distance circling against a light cloud backdrop. All you can see as a silhouette, that’s probably the male.

Wow. So they kind of in visual distance of of each other

All right. Now tell me Is this the pair that has to do with the floating bridge?

Yes, it is the 520 floating bridge, which we’re looking south at right now across the water has been home for many years to a mated pair that locals have given the names Eva and Eddie, and I’m not sure why but they chose the lead characters from the old 60s sitcom Green Acres that starred Eddie Albert and Eva Gabor as New York City people that go out to a farm and decide to take up country life to kind of simplify things. And of course, the show was about all the ridiculous problems that they would encounter with local yokels and trying to work farm equipment when they were basically city people. Anyway, they named these two eagles, Eddie and Eva. And the Eagles love the 520 Bridge because there’s lampposts on the bridge. And the Eagles would love to sit on those those lampposts and look in the water for fish coming by. Eagles are fish eaters. So Lake Washington is like their their dining area. Well, unfortunately, one day, Eddie the eagle caught a fish, dropped it on the 520 freeway, and then flew down to get it. And as he did, he was hit by a Metro bus and killed. And it was, you know, a sad time for everyone because these Eagles have become quite beloved because they’re so visible. And I remember the stories the bus stopped and the driver got out and the people on the bus got out and everyone was “No! No! One of our eagles!” And it was Eddie and he he did not survive that. But Eva found a new mate, as they will, and to kind of keep the Green Acres thing going. They named him Albert for Eddie Albert the actor. So now we have Eva and Albert that are the nesting Eagles of the Broadmoor golf course and they tend to hang out right around 520 and use this area as their, as their hunting fishing grounds. So Ava and Albert are local Eagle celebrities.