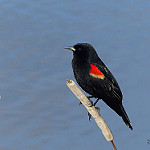 What kind of habitat do cattails on our water’s edges provide for the red winged blackbird?  Seward Park Audubon Center Lead Naturalist, Ed Dominguez and KBCS’s Yuko Kodama talk about this habitat and this talkative bird at the Union Bay Natural Area near Seattle’s University District.

who’s hiding in those cat tails along the water’s edge. Next up Audubon Center lead naturalist Ed Dominguez shares the story with 91.3s, Yuko Kodama.

We’ve got a big grove of large water plants called cattails along the shore. This is a native plant, so we’re glad to have them. And cattail has a long blade of leaf and then the cattail itself, of course is on a tall stock and kind of looks like, I’m not sure like a corn dog on a stick. But that corn dog is actually thousands of seeds that are encased in in a large corn dog shaped capsule. And when you can see some of those capsules are breaking open, each of the little seeds has a feathery tuft that it’s attached to and the wind will blow and those seeds will fly into the air on those tufts for wind dispersal. So that’s how this plant propagates itself is through wind dispersal. The wind blows the seeds on the little feathery tufts and you get a large grove of these along the shore, which provide great habitat for many birds that like to kind of stay under cover along the water’s edge. And so I’m sure we’re looking at at this great field of cattails. But if we could somehow have X ray vision, we would probably see a variety of different water birds in there everything from green herons to Virginia rails to to sora to bitterns to all kinds of birds that might be here in the wetlands area using these cattails for cover. And of course the the seeds themselves provide protein and food for birds. So cattails are a nice, nice plant to have along the shore. And of course, many times they’re used in plant decorations. So florists, will use cattail as the centerpiece of a large floral decoration.

I hear the… (bird calling)

Yeah, red winged blackbirds, let’s see if we can get him again. (bird calling)So that’s the sound of a bird that almost exclusively uses cat tails for its home. That’s the Red Wing Blackbird. It makes a very distinctive vocalization, kawee konk (bird calling). Just like that. It’s nice when they come on cue for you. Red winged blackbirds inhabit these cattail marshes like we have here. The females will build their nests down inside these dense blades of the cat tail leaves and so there’s great protection and camouflage. And the male red winged blackbirds, (Bird calling) singing like that are claiming this area as his territory. So that warns other males that, “don’t come over here thinking you can establish yourself because this is my area.” And then of course you get males that are maybe be 100 yards away, and that male will sing, “Oh yeah, well, this is my area. What’s it to you?” So particularly, even though it’s winter, we’re hearing a bit in the spring you’ll just hear multiple red winged blackbirds all calling back and forth, saying that this is my territory and I claim it and also all of you female red winged blackbirds come over and check me out because I would be a great partner to raise your family. So it’s a really neat call, kawee konk, and whenever you’re near cattails or marshy areas you’re going to hear red winged blackbirds because this is what they use for their habitat.

That was Audubon Center lead naturalist Ed Dominguez walking with KBCS’s Yuko Kodama in the Union Bay natural area in Seattle’s University district for our access to urban nature series.