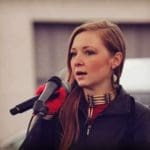 The Prayer Skirt, a long skirt adorned with ribbons, is ceremonial regalia for the Plains tribes.  During the demonstration against the Dakota Access Pipeline at Standing Rock, indigenous women of many different tribes began to wear the prayer skirt at ceremony in solidarity with the Plains Tribes women.

Prayer skirts, have also been adopted into events calling for more awareness and support for families of missing and murdered indigenous women.  KBCS’s Yuko Kodama spoke with Noel Parrish, a member of the crane clan of the turtle mountain band of Chippewa Indians, about  the relationship of the prayer skirts,  missing and murdered indigenous women and the struggle to protect our waters from the fossil fuel industry.