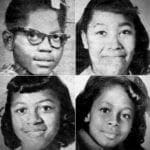 On September 15th, 1963, the 16th Street Baptist Church was bombed by the Ku Klux Klan, killing four young girls. This bombing marked a turning point in the United States during the Civil Rights Movement, and contributed to support for passage of the Civil Rights Act of 1964. Dr. Carolyn McKinstry was 15 years old at the time, and was in the building when the bomb exploded. Dr. McKinstry addressed participants of Project Pilgrimage, an immersive civil rights journey about that day in 2018.

KBCS’s Ruthie Bly was there to record the talk.

0:00
Dr. Carolyn McKinstry was in the 16th Street Baptist Church in Birmingham, Alabama on September 15, 1963, when she was 15 years old. On that day, the church was bombed by the Ku Klux Klan, killing four little girls and injuring 22. This bombing marked a turning point in the United States during the Civil Rights Movement, and contributed to support for passage of the Civil Rights Act of 1964. Dr. McKinstry reflects on the day the church was bombed with participants of Project Pilgrimage, an immersive civil rights journey.

0:35
When I came in at 9:30 with two younger brothers, Alan, who was six and Wendell who was 10. And my job was a secretary. So I put them in a class, pass out these little reports. And my job was to count the money, take the attendance, tell what the summary was Sunday schools, and then we would reconvene about 10:30. And I would read that report. So this day, I did it as I’d always done it. But when I came in that morning, the church clerk Mabel Shorter, she was an older lady, was complaining about phone calls. Now the church had been getting phone calls all along, but they never shared that with children. There are a lot of things that we didn’t know because they didn’t tell us. But she told me that morning and I just kind of just thought she was kind of overreacting to some things, you know, I didn’t pay too much attention. bomb threats, ugly conversation. When I spoke to Misses Shorter, pass out everything when I came back at 10:30. I got up and left my class, but my normal habit was to just get up, collect all that stuff, again, create the report. but you had to pass the bathroom where the girls were to get upstairs. But at that time, you if you went upstairs, the door was right there. And when I got to the door, the girls were there. The four girls were there. We were excited about two things that Sunday – it was Youth Day, which meant we were in charge of everything and we loved being in charge of the worship service and everything. The second thing was a club meeting we were having. Cynthia Wesley’s father was my grade school principal; grades one through eight. Chris McNair, Denise’s father, was my ninth grade teacher. He was also the only black photographer that we had. Carole Robertson, her mother was our local librarian in the black library, we had one. And then Addie’s sister Judy was in my Sunday school class. But I spoke to them and rushed past because I knew I had to get upstairs to get that report ready. I saw everybody. there were actually five girls in the bathroom, didn’t see the fifth one, Sarah, she was in the back. She survived. We think she survived because of the part of the bathroom that she was in. She’s actually in one of the stalls, if you if you walked into the bathroom there was a big lounge area with freestanding mirror and sofa and chair. And then you went through another door and there were toilets and the toilets were those big steel doors back here with the glass plate on the back. And so I didn’t see her at all. But I spoke to them, and then just made my way upstairs. Our lesson for that day was a love that forgives. And it comes from the text, Luke 23 “Father forgive them, for they know not what they do”. So we had an opportunity to study that lesson for Sunday school. But we did not know that we would not ever get to hear the pastor’s message. When I left the girls and started upstairs got to that office were Miss Shorter had been. She wasn’t there anymore. But the phone was ringing. I answered the phone still holding all that material. And the male caller, on the other end, said three minutes. And as quickly as they said that they hung up. And when they hung up, I hung up the phone, but I’m still holding all these materials. And I stepped out into the sanctuary. And only because media is always there, CNN, everybody, they come in and they want to count the steps, they’ll say “show us where you were” and they count the steps. So we know it was just 15 steps, answering the phone walking out into the sanctuary when the bomb exploded. If you were in the church, that very first aisle, the first row is where I was walking, I got to the first aisle when that side of the building and everything came crashing in on that side. And of course, we didn’t have carpeting then, we had hardwood floors. And you could hear people scream. And then you could hear the sound of feet of shoes against the hardwood floor, people running out and that’s when I got up off the floor and started running out with everybody else. But looking for those two brothers, the six year old and a 10 year old. And when we got outside the church was already surrounded by cops. We learned later, much, much later years later that everybody knew that the bombs had been planted. In the court testimony, what we heard was that the bomb didn’t go off when it was supposed to 10:22 is kind of an odd hour. But what they said was they – It was a homemade bomb. And the intent was that it would have gone off about maybe four or five, six in the morning before the church people actually got there. But for whatever reason, it didn’t. The time, we know the time because the clock stopped. And so

5:16
I did not attend the funeral of the girls, the parents called several times. But on that Sunday when I got home, I wouldn’t wouldn’t learn until about four o’clock that day that the girls never made it out of the bathroom. And I thought about it and I thought about it. But I couldn’t make myself go to the funeral. When we went to school on Monday morning. There was nothing said about the girls no moment of prayer, no, no. No special address or anything. No, no, what’d called it, assembly. And there was nothing done at the church even when re-entered this church. And there’s nothing in the church that’s named after the girls. Months later, in April of 1964. We were awakened again to a bomb that exploded at three in the morning. And we heard this horrible shrill screams outside it just sounded like someone was being murdered. But it was the home of the Crowell family. We live directly across the street from them T.L. Crowell was an accountant, a CPA. And his wife was a fine arts teacher here in the Birmingham schools. They had two boys that were part of the American Friends program where promising young black students went up north, Angela Davis would have been one of those, but they live with white families. And the idea was that they would get a better education up north. And then they could go to a better school, Ivy League school, and then come back here and make a difference in the communities here. So when that house was bombed, we were awakened at three in the morning to the sound of the glass crashing, and we thought our house was falling down. It was horrible. And then we heard all these screams and it sounded like someone was murdering the lady. But she awakened but the husband and the two boys didn’t wake up. So she was trying to wake them up from outside. She was screaming and screaming their name and trying to wake them up being outside without going back inside the house. We wouldn’t be able to see until that next morning like seven or eight o’clock, what the damage was to that house. But I say to everyone that bombing was a way of life in Birmingham. On any given day, we could just be sitting outside on the porch on the curb or somewhere and we would hear that sound. It always felt like the earth shook. Like “Boom!” way out there somewhere. But then it would feel like the earth moved or shook. Anytime that we heard that sound. We knew that within a few minutes the phone would ring and someone will call and they would say they just bombed the A.G. Gaston Motel or they just bombed the home of Arthur Shores. And you would get another call but you were hoping that always hoping that that call will say no one was hurt.

7:49
That was Dr. Carolyn McKinstry speaking in February 2018 to a Project Pilgrimage cohort at the Birmingham civil rights Institute. Special thanks KBCS’s Ruthie Bly for the recording. Dr. McKinstry will be in Seattle tomorrow night, and she’ll speak after a performance of Nina Simone: Four Women at the Seattle Rep. For more information on the event, you can visit seattlerep.org You can find more information about civil rights pilgrimages at projectpilgrimage.org. Thanks for listening to KBCS, your independent radio station.