How the Indigenous Community Assisted the Fort Sill Protest 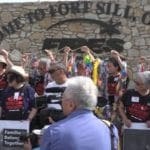 Paul Tomita is a third generation Japanese American who attended a protest in June, against the Trump Administration’s plans to incarcerate 1400 children at US army post, Fort Sill this month.  The organizers of the event were Japanese American, and some were elders who had experienced forced relocation and incarceration by the United States government during World War II.

In 1942,  700 men of Japanese ancestry were incarcerated at this same location during World War II.  One man from the Japanese community was murdered there.  In 1894, Apache tribal members, including Geronimo were held at Fort Sill as prisoners of war.  Geronimo died there.

Tomita describes how the indigenous community in Oklahoma supported the Japanese American protestors at the Fort Sill protest.