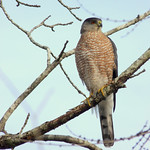 Which birds in our forests have Ewok-like skills in our local forests?  Go for a walk with Seward Park Audubon Center’s Ed Dominguez and KBCS’s Yuko Kodama on the trails of Seward Park.

Unknown Speaker 0:25
So that’s the sound of one of our four juvenile Cooper’s hawks. So Cooper’s hawks are in a group of hawks that are called accipiterwhen we’re talking about the raptors that we have called hawks, there’s two big groups. The soaring hawks like our common red tail hawk that you’ll see over any of our freeways as you’re driving along that ride the summer thermals in a circle and big loops up in the sky looking for small mammals down on the ground. Those are in the soaring hawk category and they’re calle buteos. These hawks, the Coopers hawks, are in another group called accipiter, and their hunting strategy and their prey is completely different. Cooper’s hawks are songbirds eating hawks. And instead of writing thermals and soaring, their bodies are designed to move through forests like we’re in now with great agility and skill, kind of like in the Star Wars movie where the Ewoks were riding those sleds and they were flying through the forest and not running into anything because they were skilled at maneuvering. Cooper’s hawks have short wings, and long tails that act like a rudder, and so they whip through the forest and will snatch birds, either out of the air or snatch birds as they’re perching. We have a nest right here in Seward Park, and four eggs hatched. And so we have four young Cooper’s hawks, that like all youngsters are constantly begging to be fed….so that squealing sound that you’re hearing is one of the four youngsters saying ‘Mom, dad, bring me something to eat, bring me something to eat’. And so they will bring in one of our songbirds, a song sparrow or a towhee, a junco for the youngsters to eat. They’re a medium size hawk, they’re not nearly as big as the soaring red tail hawk. In size, they’re more crow size, maybe slightly larger than a crow, but they’re not a big animal. They’re small body is what they need to be able to maneuver through the forest, through all these branches and trees and their prey is small – songbirds so they don’t need to be big bodied like an eagle or a red tailed hawk.

Unknown Speaker 2:36
Yeah, looking out into the field. Yep. Do eagles eat them?

Unknown Speaker 2:43
No, these birds are way too maneuverable for eagles. So eagles primarily will eat fish. They will also eat rodents. Like we’ve got Eastern cotton tail rabbits. The population has exploded this year. -There he goes. But these Cooper’s Hawks are way too maneuverable for a big eagle to try and get ’em to be like I don’t know, a naval analogy. It’d be like a little speedboat, a PT boat, buzzing around in a destroyer a battleship trying to get it that just the eagle can’t move with that kind of agility to get a small bird like this. There it is You see the pale breast. It’s almost white with dark vertical streaks that hang down. We call them teardrops.

Unknown Speaker 3:36
Striped bands on the underside and the tail.

Unknown Speaker 3:42
So they’re all sitting around waiting for food..

Unknown Speaker 3:44
Waiting for food. Because although obviously they fledged and so they’re able to fly. It takes a lot of skill to be able to successfully capture prey when you’re a raptor. In the case of these guys, since they feed on songbirds, they have to be able to track a songbird down flying through the forest, or see one that’s perched somewhere, judge the right amount of speed to fly in with, get their talons extended at the right rate and come down and clasp on them. And there’s a lot of mistakes before they finally are successful. So all summer long, they’ll be dependent on their parents to feed them, while they continue trying to hone those skills so that they can make a living on their own.

Unknown Speaker 4:26
Wow! There it goes!