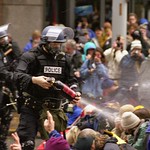 Today marks the 20th anniversary of the World Trade Organization or WTO ministerial conference in Seattle. The WTO is an international organization dealing with the rules of trade between nations. Decisions made by unelected trade delegates at this conference impact the worldwide economy, working conditions and the environment. Leading up to the WTO ministerial, hundreds of organizers, farmer, workers, students, and artists from throughout the world planned a massive demonstration to disrupt the negotiations. The protesters opposed what they interpreted as the unregulated power of multinational corporations through free trade agreements Tens of thousands of people used a diversity of tactics in the streets of Seattle throughout the last week of November, 1999, shutting down the event for the week, and sending a message worldwide of their presence.

Listen in on this one-hour KBCS WTO 20th anniversary special.

Thanks to story contributors, Gol Hoghooghi and Sam Britt.  Special thanks to Jill Friedberg for assistance with the special