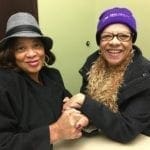 February 28 7:30 at the Northwest Film Forum

Greg Delia 0:05
Next on 91.3 KBCS, we have a story on the local Black Power movement. The Black Panther Party Seattle chapter operated from 1968 to 1976, offering free breakfast programs, a free health clinic, black issues newspapers and many other services for the community. In 1976, the Seattle chapter broke away from the National Party in Oakland, but continued to operate all of its programs as a panther cadre until 1982, becoming the longest running Panther cadre outside of central headquarters. Today you’ll listen to a highlight of the women in the Black Panther Party. Vanetta Molson was 19 when she joined in 1969, Molson helped run the free health clinic and served in the party for seven years. Meanwhile, Phyllis Noble Mobley joined the Seattle chapter of the Black Panther Party when she was 15 years old. Noble Mobley remembers knocking on doors to tell residents in the central district about what the party was doing. KBCS’s Yuko Kodama met with Noble Mobley and Molson to talk about life as a black panther women at Seattle’s Douglass Truth library. Noble Mobley starts with how her family joined the Black Panther Party.

Phyllis Noble Mobley 1:08
There was an incident right on 23rd Avenue and my brothers were in an band competition, “The Nobleman”. And at the end of the competition, we were all walking out and they were putting their equipment in the car. And for some reason, there was some altercation in the front. And so quite naturally, we went ran out to see and one of my brothers was being held down by a police officer. My other brother jumped in and so when he jumped in, my mother jumped in, and then the police came, and they pushed my mother down. And that was a problem – because then they had like, seven children jumping on them which I think my brothers were arrested and so that is how they came in contact with the Black Panther Party because they were arrested. And from that point is when we all joined. And in becoming a part of it, they were being aware of things that were happening right in the Seattle area that we weren’t aware of really, that police would attack you. Some of the things that happened, that was going on.

Yuko Kodama 2:18
So you started realizing that this was a shared experience by many more people in your community?

Phyllis Noble Mobley 2:24
Absolutely. Young and old. Through the Black Panther Party, we had a voice that we never had before, and sticking together like a whole community brought on a lot of changes in ourselves and in the community.

Yuko Kodama 2:39
Vanetta Molson and Phillys Noble Mobley, reminisce about the Black Panther Party Seattle chapter’s women and families who support it and were members of the movement.

Vanetta Molson  2:54
Badass. She’d fuss anybody down. Y’know? If they step out of line

Noble Mobley 3:05
One person I always remember it was Mrs. Jerrie Weir. Do you remember Mrs. Weir? She was a community activist and she was very, very vocal. And I remember specifically just her saying that ‘No, is not the end. If you’re searching for something, keep searching until you get a Yes. So you don’t have to stop at No.’ I’ve really taken that on like No, if you tell me No, and I know that it’s not right. I want to achieve what I want to get the I’m going to continue to get to Yes.

Yuko Kodama 3:41
Mrs. Dixon, whom Molson and Noble Mobley referred to is Francis Sledge Dixon, the mother of Aaron and Elmer Dixon. The two brothers, along with others from Seattle approached the Black Panther Party Co-founder Bobby Seale in the Bay Area, about starting a Black Panther Party Seattle Chapter. The Seattle Chapter was the first branch of the organization outside of California. Aaron Dixon was appointed as its Captain.

Noble Mobley 4:08
Oh, yeah. Okay, strong, strong mother. Essentially she was like my mother. If the sons couldn’t do as she would do it, she’ll fight for em’, all the way. Strong mothers back in those days, particularly in the party. They supported us. A lot of the women they wanted you to know about health concerns. They wanted you to know, education was the key of family. They had a lot of knowledge. -For me as a young person it was just the fact that they said, ‘there’s nothing impossible you can turn the impossible into something that is possible.’ And so that’s what I learned out of that whole situation from the women. I never heard, forme anything negative, I just heard, let’s get together. Let’s do this. Let’s push forward. Let’s help each other. Let’s be a family. For me, it was just learning to support each other. And you know at 15 that goes a long way you know in life just turning around things that you thought that were impossible.

Greg Delia 5:12
That was an interview with two former Black Panther Party Seattle Chapter members Phyllis Noble Mobley, and Vanetta Molson. Noble Mobley went into ministry and Molson is a retiree from decades as a registered nurse. They’re featured in a new documentary film series “Keepers of the Dream Seattle women Black Panthers”. Two screenings in February have sold out. The next ones are at the Northwest Film Festival on February 17, and 18th at 3pm and March 6, at 7:30pm.