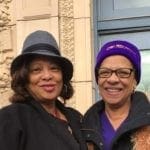 Greg Delia 0:06
Next KBCS presents this story on the local Black Power movement. The Black Panther Party Seattle chapter operated from 1968 to 1976, offering free breakfast programs, a free health clinic, black issues newspapers and many other services for the community. In 1976, the Seattle chapter broke away from the National Party in Oakland, but continued to operate all of its programs as a panther cadre until 1982, becoming the longest running Panther cadre outside of Central headquarters. Today you’ll listen to a highlight of two women who were in the local Black Panther Party chapter. They’re two of five women featured in a new documentary film ‘Keepers of the Dream’. Seattle’s Phyllis Noble Mobley joined the Seattle chapter of the Black Panther Party when she was 15 years old noble Mobley shares details about the Black Panther Party’s 10 point program, and what it was like to knock on doors and Seattle’s central district neighborhood to talk about the party’s programs.

Noble Mobley 0:58
Understanding the 10 point program was understanding what we needed to do in the community and what we wanted from the white people basically. It talked about, we want freedom, we want the power to determine the destiny of our community, black community, you know, we want full employment. It’s very important. We wanted to end robbery of the white man against our black community. We want education for our people. We wanted an immediate end to police brutality. We wanted all black men to be exempt from military services. We wanted freedom for black men in federal prisons, county city, all black people brought to trial to be tried by a court or jury of their peers. And we wanted housing and bread, education, clothing and justice for our people. And so all of those were very important because they were not happening at that time. The 10 point program was very, very, very important.

Yuko Kodama 2:07
And tell me what you were talking about with people as you did your door knocking

Noble Mobley 2:12
Well, we were we were discussing a lot about the 10 point program and how there needs to be change in the community. I’ve actually learned a lot about housing and as far as when I knocked on some of the doors, the disrepair of the houses that were in very great need and people were living like that. And so it was important for us to get out that there needs to be a change and that the change was going to have to come through the community going out reaching out. Telling them we’re not going to stand for this any longer. And we talked about health and just a lot of things that were in the newspaper that just brought things to the forefront because we knew that it was happening but we never talked about it. And so the Black Panther Party brought that out we need this is something we need to do not tomorrow, today, we need to change. – and so we did whatever means necessary that we had to do to change and one was to go directly to the community and let them know that we need your support as well you know so and we definitely got it. I don’t think I’ve gotten a negative response from anybody that I talked to going through the community. We were able just to talk about the needs of the people and they knew that there was a need and so they responded very positive to what we were doing. Some people would want to join you know, the panther party and that was one way of getting the word out that there was a party that they could join and most of the time it was a lot of a lot of young people are older than older than me but um not seniors, but then there were people’s parents that were aware and wanted to join as well. So there there were so many a range of ages that joined

Greg Delia 3:50
That was Phyllis Noble Mobley speaking with KBCS’s Yuko Kodam. Next vanetta. Molson was 19 when she joined the Black Panther Party in 1969, Molson helped run the free health clinic and served in the party for seven years. She also lived in the party headquarters for a time. The next story picks up right after KBCS’s Yuko Kodama asked Molson, what the inside of the headquarters look like.

Vanetta Molson 4:12
It wasn’ta lot I mean, you know there’d be Stokely Carmichael, Mao Tse Tung pictures engraved because of the sand. We had sandbags galore.

Greg Delia 4:26
the sandbags were lined up as defense against the possibility of being attacked, that is shot by the police or other government authorities. Vanetta Molson, Phyllis Noble Mobley and Yuko Kodama sat together to hear more of Molson’s experience with the Black Panther Party. We’ll pick up the discussion right after she described the sandbags in the headquarters.

Vanetta Molson 4:45
But it wasn’t dark. It was not always smiles and I mean that not always but there was a good feel of camaraderie and doing a united purpose and living together. That way, we were stronger. So there was a lot of good feeling.

Noble Mobley 5:09
For me there was, like you say, stronger, there was a sense of strength and we were together, and

Vanetta Molson 5:16
that we could take over the world.

Vanetta Molson 5:22
That’s why the revolution was so real to me. All the changes that needed to be made, and we were all purposely moving towards it, getting them getting them

Noble Mobley 5:36
just within health, you know, and the children, making sure that they were Yeah, and

Vanetta Molson 5:43
getting an education. One of the programs I liked the most was busing to prisons. We took our sickle cell anemia, lancets and, and tools and tested the prisoners for sickle cell anemia. But the biggest part about that program was that they were uniting people who had been separated, went to Monroe went to Walla Walla, and Purdy, went through those three prisons and maybe more, but I would, I wasn’t on all the missions. And one of our Panthers started a chapter of the Black Panther Party in Walla Walla. He was a prisoner.

Noble Mobley 6:30
So in the 60s, wasn’t that, like the height of the sickle cell when people began to learn in Seattle more about sickle cell?

Vanetta Molson 6:38
Yeah, yeah. That in the parks, we’d go out and do screenings on on in the parks. Of course, they could have it at the clinic, too. We were doing things. And those things made a difference. But we can’t stop. I stopped for like 35 years nursing.

Noble Mobley 7:02
And then now you’re working on this still helping people so it’s just, it’s just in you. I think for me, it has never gone away. As far as the Black Panthers just still in our minds and our hearts. We’re still continually on jobs and things like that. We’re still we’re vocalizing what is unfair practices. And we probably need to be a little more diligent with our children and teaching them what we learned. And so that’s what that’s what I could say we need to teach them what we learned about the Black Panthers. It was something that happened, a group of people that were together, and I think that for families that we need to teach our children about, at least about the 10 point program.

Greg Delia 7:43
That was an interview by KBCS’s Yuko Kodama with two former Black Panther Party Seattle chapter members Phyllis Noble Mobley and Vanetta Molson noble Mobley went into ministry and Molson is a retiree from decades as a registered nurse. She’s active today in the organization Puget Sound advocates for retirement action. Molson and Noble Mobley are two of five women featured in a new documentary film ‘keepers of the dream. Seattle women Black Panthers.’ You can find out more information about the film at Seattlewomenpanthers.com