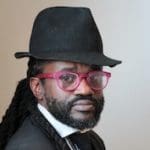 Yuko Kodama 0:00
91.3 KBCS, this is Yuko Kodama. Musician and soon to be theologian in residence at Valley and mountain fellowship, and the Rainier Valley, Reverend Sekou spoke with me about art and social movement.

Reverend Sekou 0:14
The question for me right now is what is the task of the artists in the time of monsters? And it seems to me that there are kind of three options, right? There’s the critic who’s going to constantly critique, pound upon, show the contradiction, highlight the hypocrisies. Who are going to always be naming what is wrong, which is an act of rebellion. So just to point out what is wrong with the (?). And then the other option, perhaps, is the (?) Those of us who believe you know, at one level that cosmopolitanism is our religion, and bohemian-ism is our politics, right? That we’re attempting to exist in a space that is often multicultural, that is in solidarity, and in conversations with variety of other minoritized people around the world. Attempting to maintain the spirit of the critic, but primarily through the lens of the artists in the sense of what is artistic production? Artistic production, in and of itself becomes a critique. And then for me, the third option, perhaps is the data of the prophet, right? That of the artists and this is what we get with the great James Baldwin, who was a prophet in the sense of embodying the spirit of critique. Living the life of the artist isn’t a (?) in terms of his own sense of cosmopolitanism, right? But also, the prophet is not only critiquing and tearing down, the prophet begins with the critique of oneself and then of civilization. The one who lives in and then attempt to prescribe a new understanding of the world. And so all of these, I think, play a fundamental role in terms of the critique of the world in which we live, because one of the challenges that we face is not just that White folks in America are treating Black people bad or that Donald Trump’s not nice, but he’s a symptom of a declining Western civilization and that the West is in crisis and that modernity is in crisis. Now the crisis that is arrived that has either come through the fact that this is just a logical extension of modernity, which came with the nation state, which came with conquering which came with the making of empires and drawing of arbitrary lines and the trading of flesh. Right? Or it could be, it has failed upon its promises. Whatever the case is, it is not working. And that Trump is a symptom of that crisis in modernity. And that artists have a unique role throughout the world, to be able to step outside of the religious dogma and the political affiliations in such a way that they can bring a critique on the civilization and at our best, bring a little joy.

Reverend Sekou 3:02
People making amazing, beautiful art all the time, right, you know, through popular cultures. What you get with Kendrick Lamar, who was a genius in and of itself in terms of mainstream and musical. Or Janelle Monae, in terms of what she’s been doing with ‘Dirty Computer’ and troubling gendered norms, and notions and that kind of thing. But I think for me, one of the greatest as of late is the film ‘If Beale Street Could Talk’, which is taken from James Baldwin’s, a powerful novel, right, it’s centered around a Black family wrestling with the prison industrial complex, and the arbitrary forces of violence executed by the police. So at one level, filmmakesr started off with a few steps ahead of everybody else, because they’re wrestling with Jimmy’s words. So when you begin with Baldwin’s words, right, you kind of already ahead of the game. And then the way he executes that thing, in terms of just in terms of just the art, right, I’m just talking about the sheer craft, the cinematography. The way in which he renders the multiplicity of black hues. That’s one of the things brilliant about this filmmaker is his love for poor Black people. Right? Because Black films often, you know, kind of play themselves out as historical throwbacks, right, in terms of what is in mainstream. And I’m not saying anything’s wrong with them, like so ’12 Years A Slave’, you know, or ‘Selma’ which are brilliant films, but they’re kind of historical throwbacks. Right, in terms of turned to rendering Black suffering in the past with some triumphant outcome, or the kind of Black bourgeois fantasies. Right, so like, ‘Black Panther’ is a form of a Black bourgeois fantasy. Great film. I’m not trashing the film. I’m just talking about the categories that the world is comfortable with. But they’re not comfortable with beautiful and the geniusness of poor Black people. And this filmmaker loves us, much like Jimmy did.

Reverend Sekou 5:10
But part of the film that The Academy doesn’t understand, the acting is brilliant. Michael B. Jordan should’ve gotten an award for it. What’s brilliant about the film, and what The Academy could not…they couldn’t wrestle with Black working class, genius and the elegance and the eloquence of their quotidian existence, how they walk through time and space, how they care for one another. Tupac (Shakur) said his mama worked a miracle every Thanksgiving. How they craft together, you know, the scraps of their underpaid, and unionized work to be able to make an existence for themselves. And that’s what ‘If Beale Street Could Talk’ was. And what’s so powerful about the film, without any spoilers, is that there ain’t no bow on the end. Is that people just keep living and they keep loving, right? And in the way in which they live and love with dignity in these undignified circumstances, says to the Empire, we will not bow down.

Yuko Kodama 6:17
Reverend Sekou, musician and soon to be theologian in residence at Valley and mountain fellowship in the Rainier Valley. This story is possible thanks to listeners like you. For more KBCS stories and to support our work with a donation you can visit KBCS.fm