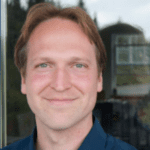 Hardy Merriman is President and CEO of the International Center on Nonviolent Conflict. For nearly two decades his work has focused on human rights and prodemocracy movements around the world that use non-violent tactics, strikes, boycotts, non-cooperation and other non-violent actions to fight authoritarianism. When Trump ordered the military to attack non-violent black lives matter demonstrators in Washington, D.C., it was a wake-up call for Merriman on what the president might do to thwart the election. He joined forces with inter-generational and interracial organizers and wrote, “Hold the Line, a Guide to Defending Democracy.”  KBCS’s Martha Baskin has this interview with Merriman.