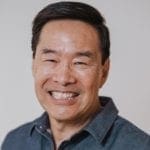 During WWII, over 120,000 people of Japanese descent (many of whom were US citizens) were incarcerated in 10 internment camps across the United States.  The Densho Project collects stories from the bombing of Pearl Harbor, what it was like in the days leading to incarceration, the conditions behind barbed wire and watchtowers, and the horrors of returning to a racially tense society after incarceration.

Tom Ikeda shares some of his takeaways from listening.