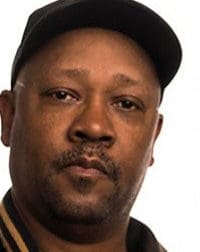 Davey D contributes to The Grit on KBCS. He is a host and producer for Hard Knock Radio, the hip hop culture and politics program produced at KPFA, Berkeley, CA.

An award-winning journalist, hip hop historian, deejay, and activist, Davey D grew up in the Bronx and graduated from UC Berkeley.

He writes for the San Jose Mercury News and teaches at San Francisco State.

Davey D speaks at high schools, universities and community centers throughout the country on hip hop, politics, and bridging the digital divide.