Beth Takekawa, the Executive Director of the Wing Luke Museum of the Asian Pacific American Experience is retiring after 24 years of leadership.

Takekawa reflects on the importance of a museum where stories  are gathered and shared from the Asian Pacific American community’s perspective.

Thank you to the South Seattle Emerald for partnership on a print version of this story.

END_OF_DOCUMENT_TOKEN_TO_BE_REPLACED

91.3 KBCS · 91.3KBCS 202103023 Vigil For Victims Of The Atlanta Shooting
A group gathered for a vigil in Seattle’s Chinatown International District to honor the lives of eight people killed in the Atlanta shooting on March 16th.  Listen to collected sounds and interviews with people there.

END_OF_DOCUMENT_TOKEN_TO_BE_REPLACED 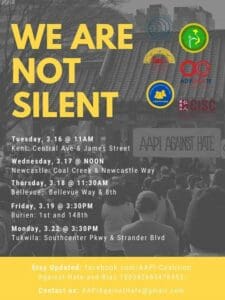 Take a tour of a sampling of places in Seattle’s Chinatown International District with Doan Nguyen.  Nguyen is the Senior tour Manager for the Wing Luke Museum of the Asian American Experience.  END_OF_DOCUMENT_TOKEN_TO_BE_REPLACED