On the Ground in Poland to help Ukrainians Fleeing War

What’s happening on the ground in Poland where Ukrainians are fleeing to by the thousands? A local Sammamish resident and his brother are there to help.

Here is information on their project, Suitcases for Ukraine.

All You Need is a Good Heart

What does it take to effectively demonstrate for human rights?  Community organizer and writer, Magdaleno ‘Leno’ Rose-Avila reflects on his first protest in high school. END_OF_DOCUMENT_TOKEN_TO_BE_REPLACED

How does being undocumented impact your life? Does it impact where you go shopping for groceries, where you rent your apartment, whether you drive or buy a car or have access to a cell phone? Dulce Garcia, Executive Director of Border Angels, speaks to how being undocumented shaped who she is today.

END_OF_DOCUMENT_TOKEN_TO_BE_REPLACED 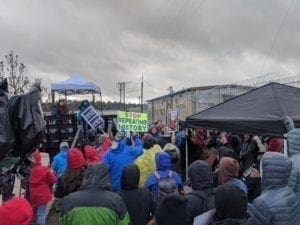 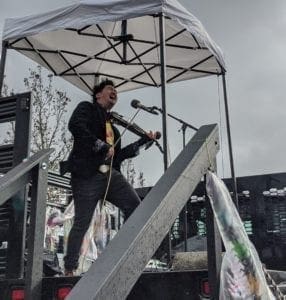 Jaime Rubio Sulficio faces deportation, and took sanctuary at Seattle’s St. Mark’s Cathedral at the end of March.  Rubio was a business owner, Latin dance instructor and active member of the community.  He and his wife, Keiko Maruyama describe their experiences adjusting to this chapter in their lives in this series on their experiences.

The border town of Arivaca, Arizona, is no stranger to migrants crossing through the desert and mountains in hopes for a better life in the U.S. The documentary film Undeterred, shows how militarizing the border can result in migrants dying in the desert and in the neighborhoods of towns on the border. The film was featured at the 2018 Social Justice Film Festival in Seattle. KBCS’s Ruth Bly recorded the panel discussion following the screening.

END_OF_DOCUMENT_TOKEN_TO_BE_REPLACED

What is asylum status, the process for applying for asylum, and what are the chances of  attaining it?  Maggie Cheng, a Northwest Immigrant Rights Project staff attorney, speaks with KBCS’s Yuko Kodama about what it’s like to seek asylum status in the United States today.