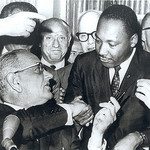 President Lyndon Johnson shakes hands with the Reverend Martin Luther King, Jr., after handing him one of the pens used in signing the Civil Rights Act of July 2, 1964 at the White House in Washington.

91.3 KBCS celebrates Rev. Dr. Martin Luther King Jr. Day by airing parts of a previously unknown recording of Dr. King discovered last December by Pacifica Radio Network. Audio of the speech will be broadcast for the first time since it’s discovery on Democracy Now! heard on 91.3 KBCS at 6 a.m., 8 a.m. and 5 p.m. You can also listen on our Democracy Now audio archive.

For information on purchasing copies of the speech, please visit Pacific Radio Archives.