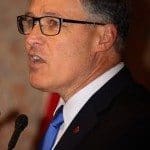 Governor Jay Inslee at the State of the State Photo courtesy: John Stang

They were responding to the governor’s annual State Of The State speech given on Tuesday, January 13, where Inslee covered themes and proposals that he had already extensively talked about during the past several weeks, with no additional proposals emerging. The governor’s plan to reduce the state’s carbon emissions was a major plank in his speech to the full Legislature.

Inslee said his plan “institutes a carbon pollution charge that would have our largest polluters pay rather than raising the gas tax on everyone.

“Under my plan, it’s the polluters who pay for the pollution,” he continued. “We face many challenges, but it is the growing threat of carbon pollution that can permanently change the nature of Washington as we know it. It’s already increasing the acidity of our waters, increasing wildfires and increasing asthma rates in our children, particularly in low-income communities and communities of color.”

Inslee’s plan calls for roughly 130 of Washington’s biggest polluters to pay for permission to produce specific amounts of carbon emissions, which scientists have linked to global warming.

That approach would be expected to raise $1 billion a year, with the governor wanting the money to be divided into several chunks, including $400 million a year going to transportation projects to replace potential gas tax hikes. The governor wants another $380 million annually to go to education with the state’s court-ordered improvements on student-teacher ratios to be the most likely recipient. Another $108 million would go to pay for a currently unfunded working families tax credit program with checks going to roughly 500,000 lower-class families. The remaining money, around $100 million, would go to businesses here competing against out-of-state and foreign firms that don’t face the same carbon-pollution restrictions.

Inslee hopes to reach statewide carbon emissions limits that the Legislature set in a 2008 law. That measure set a goal of reducing the state’s greenhouse emissions to 1990 levels by 2020, with further trimming of emissions to 25 percent below Washington’s 1990 level by 2035 and to 50 percent below by 2050.

In December, Inslee said the carbon emissions proposal would eliminate the need for gas tax hikes of up 10 to 12 cents per gallon that various legislators from both parties have proposed in talks deadlocked for 21 months to put together a roughly $12 billion package for transportation construction, operations and maintenance.

After Inslee’s speech, Republican House and Senate leaders ripped into his carbon-emissions plan, arguing that industries are already making internal changes for business reasons to cut their carbon emissions with the state well on its way to meet the 2008 law’s goals without carbon-emissions charges.

Sen. Mark Schoesler, R-Ritzville and chair of the 25-Republican-one-Democrat Senate Majority Coalition Caucus, said the University of Washington and Washington State University will inevitably end up on the list of the state’s 130 biggest polluters, and would face charges for their carbon emissions under Inslee’s proposal. He contended such charges would discourage new industries from moving to Washington and would increase expenses for other businesses — specifically citing Washington’s many food processing plants — which might opt to move elsewhere. The loss of these plants would affect the facilities subcontractors, such as trucking firms, plus neighboring small businesses dependent on the main plants’ employees’ dollars, he said.

“It does impact everyone eventually,” Schoesler said. Sen. Ann Rivers, R- La Center, added: “Is [a carbon emissions charge] a carrot or is it a stick?”

On Monday, January 12, the Senate majority coalition won a party-line vote 26-23 to install a procedural rule to keep any bill with a new tax from receiving a final vote on the Senate floor if it does not already have the support of two-thirds of the senators. The only exception is if a referendum on the new tax is included. That procedural move prevents the possibility of two or three Republicans from crossing the aisle to join the 23 minority Democrats to approve a carbon emission charges bill in the Senate — at least under the assumption that a new program of carbon charges reached through a bidding process is the same as a new tax.

Consequently, the only politically and procedurally feasible way for Inslee’s carbon emissions proposal to pass the Senate will be through horse-trading in negotiations toward the end of the 2015 session. Also, the majority coalition’s two-thirds rule applies only to new taxes and not to raising existing taxes — leaving a gasoline tax hike requiring only a simple Senate majority with an easier path through the Legislature.

Inslee also addressed tax fairness during his speech, saying, “Here’s something else we can do to bring a modicum of fairness to our tax system — a system that relies so heavily on sales tax revenue and affects our working families so disproportionally. I am proposing we fund the Working Families Tax Rebate, which was passed by the Legislature in 2008 but never funded. This could help more than 500,000 working families in Washington, mostly in rural and economically struggling counties.” This rebate is the program that would be funded by Inslee’s carbon emissions proposal.

After the Republicans’ formal speech-response session with reporters, Schoesler indicated that the GOP is not friendly toward funding the working families tax rebate program with carbon emissions money. “It’s $6 million (in administrative costs) to give money away,” he said.