A Day At The Bus Stop 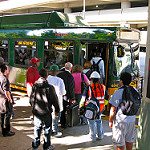 What happens at a bus stop throughout the day? In this special edition of What’s the Flux: Commuter dispatches, lead Producer, Mona Yeh and Producer, Yuko Kodama sent reporters out to visit some of our region’s busiest bus stops over a 24 hour period. You’ll listen to the rhythm at popular transit centers in our region, and what riders say about their commutes.

What’s the Flux: Commuter Dispatches and KBCS partnered with the Seattle Globalist to examine the ridership at bus stops in our region with an interactive map.

This story was edited by Yuko Kodama

The project was sponsored by the Association of Independents in Radio (AIR) as part of its national initiative, Localore: Finding America. #Finding America