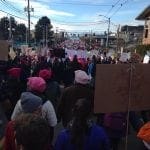 Between 150,000 and 175,000 people took part in Saturday’s Women’s March on Seattle. Listen in on some sounds from the event and hear what people had to say. A large crowd of peaceful protesters A look at a march puppet in action