Unmute the Commute: The Vanpool 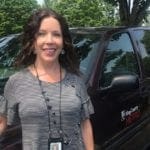 Perhaps you’ve seen them driving around town – those blue and red King County vanpools shuttling groups of commuters to and from work. Metro has the largest vanpool system in the country. Which keeps cars off the road; cutting congestion, reducing greenhouse gas emissions and freeing up riders to play trivial pursuit or sing karaoke.

Amber Cox gets into a vanpool heading from Kent to the Lynnwood Park and Ride. It’s a trip she makes three or four days a week – from the REI headquarters where she works to her home in Mountlake Terrace. The commute is around 30 miles one way and she’s been doing it for over a decade.

And she’s not the only one at REI who takes a vanpool like this one – it’s part of the company culture.

“Everybody knows who’s on vanpools,” she says. “What time your vanpool changes or what time it leaves and if you’re sitting in a meeting and they know you’re supposed to leave, somebody else will say, ‘isn’t your vanpool leaving? Shouldn’t you be going right now?”

Today, Cox’s van is sitting in a half-mile backup waiting to merge from State Route 167 onto I-405, in Renton. Congestion is a given and Cox would rather be sitting in traffic in this van than in a car alone. One reason why: the cost. I ask Cox how much she saves annually from vanpooling.

“Well, I keep track of my mileage,” she says. “And I know it’s 12,000 miles a year that I save off my car.” Cox is the bookkeeper for her vanpool, so she tracks ridership, mileage and fares. The cost of a vanpool is based on the size of the vehicle, the number of passengers and the average daily mileage. For Cox, the vanpool costs her about a $1000 a year – and her employer pays half of that. She’s been riding in her vanpool for over a decade, but the program has been around a lot longer than that.

“Well, King County Metro owns and operates the largest, longest-running commuter van program in the nation,” says Victoria Tobin, the Rideshare Coordinator at King County Metro. “We’ve been around for about 40 years. We started with a small fleet of 21 vans in 1979 and we launched the first public van pools in this country.”

Today there are around 1,600 commuter vans, carrying more than 10,000 commuters. Cities like San Diego, Houston and Los Angeles also have vanpool services, but King County’s program is the largest in the country.

“Each year we estimate we reduce 48 million vehicle miles traveled,” says Tobin. “Which saves more than 2 million gallons of fuel.  We also estimate that it prevents 50 million pounds of greenhouse gas from entering the atmosphere.  That’s about 22,000 metric tons. So, that’s a lot.”

And then there’s the social aspect. Everyone in Cox’s vanpool works at REI and they spend about two hours a day commuting together. On snow days or in bad traffic, it can be as much as three hours.  So, they’ve learned to entertain themselves on the ride.

“We spend a lot of time together,” says Cox. “Sometimes, more than you spend with your family. We like to say that we solve world problems one commute at a time, because it is a long commute.”

“We take people’s phones or whatever device they have and start going through their playlists and just picking their favorite songs or their most played songs,” says Cox about karaoke. “And generally people just join in singing and perhaps there’s arm movements. I’m sure the commuters next to us think we’re crazy.”

Which leads Cox to say this:

“The first rule of vanpool is ‘what happens in vanpool, stays in vanpool.”

The social connection isn’t limited to commuting. Cox and her vanpool get together outside of the van as well. “We’ve done happy hours,” says Cox. “We’ve done taco Tuesdays. One year we did a get together at Christmas where we invited all the friends and family, so we could meet the people we talk about. We’ve done bridal showers, baby showers, parties at people’s houses.”

And so, a little over an hour after starting out, we arrive at the Lynnwood Park and Ride, where the vanpool will meet in the morning for another commute and maybe some karaoke, too.

Unmute the Commute is supported in part by Just One Trip – a King County Metro campaign to get you out of your car starting with just one trip.