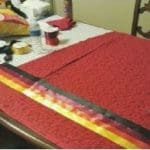 Indigenous women have taken the lead in increasing awareness of the high numbers of their sisters who go missing and die to violence.  KBCS’s Yuko Kodama takes you to a red skirt sewing circle, a community building event which builds support for, honors, and assists in the healing of the community mourning their missing and murdered indigenous women.  Thanks to Jesse Callahan for help with editing.