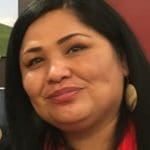 Roxanne White, of the Yakama, Nez Perce, Nooksack and Gros Ventre tribes, is an activist who advocates for the families of missing and murdered women (MMIW).  KBCS’s Yuko Kodama spoke with White about the MMIW movement at an indigenous prayer skirt sewing circle organized as a community building event in honor of Missing and Murdered Indigenous Women.

0:12
Our first nations’ sisters started leading this movement decades ago, the term missing and murdered indigenous women and girls started over there with the first nations’ sisters Highway of Tears. And they are continuing to fight systemic racism and speak for our loved ones. And when I say ours, it’s because we don’t have borders, that’s a colonized concept. We can acknowledge one another andwe’re calling awareness, we’re demanding for justice.

1:04
When one of our girls goes missing, first, you know, she goes missing from her family and her loved ones in her community. But she also goes missing to the fact that the police departments different jurisdictions say, “well, that’s not my problem. Oh, she’s an adult, she probably went off with her friends for the weekend”. Or they pull up records and they’ll dehumanize [her] by saying, “well she was an alcoholic”, or, you know, “she’s a drug addict”, or several descriptions that are very dehumanizing: prostitute. Never the name of the person that has gone missing or has been found murdered.

1:45
And part of those issues that we’re continuously seeing is coroners. When a body is found, one of our loved ones, the coroner has the responsibility and he has the authority to deem that person homicide. Or whatever he sees, right? That’s his position. But what these coroners are doing is saying that our loved ones killed themselves or they fell. Accidental deaths or “cause unknown” when they have bruises all over their bodies. They’re not doing the correct tests. But what they say is that, “Oh, she must have shot herself” and not even investigating that.

2:24
We’ll never be able to stop people from harming other people. But what we need to do is send a message to the world that that you can’t just kill a Native American and get away with it. Because right now, that’s what this government – that’s the message they send people. They send to people that there’s no justice for us, that you can do that and get away with it. And so, that needs to change. We want support from all the police departments and the FBI. From the court, to the prosecutors to the coroners. We need allies, we need non-natives, we need whoever wants to join and speak with us against that injustice.

3:12
Roxanne White lost an aunt violence in 1999. White also lost her niece last year. A vigil will be held for murdered indigenous woman Eveona Cortez this Thursday from 6:45 to 8pm at 1101 Southwest 139th Street in Burien.