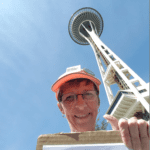 The First Friday of June is Gun Violence Awareness Day. Trese Todd, Everytown Survivors Network Fellow and a Co-lead for the North Seattle Group of Moms Demand Action for Gun Sense Washington State Chapter speaks with KBCS’s Yuko Kodama about the latest on the implementation of Extreme Risk Protection Orders, a law which passed in 2016.

A Gun Safety march across the I-90 bridge takes place this Sunday, June 9th. The event, Wear Orange, begins at 10 am at Sam Smith Park with speakers and music, before the walk across the bridge begins. According to Wear Orange, The public is encouraged to wear orange and decorate the streets with orange for that day.

Yuko Kodama 0:00
With me in the studio today is Trese Todd, Every Town Survivors Network fellow, Trese Todd is also the co-lead for the North Seattle group of Moms Demand Action for Guns Sense Washington State chapter. Thanks for joining me in the studio Trese. Thank you for having me. So the Extreme Risk Protection Order in Washington State was passed in 2016. Give me some details on what this means.

Trese Todd 0:27
Well, Extreme Risk Protection Orders actually apply to anyone that a family member or law enforcement determines, and can articulate to the core, are a danger to either themselves in terms of suicide or others, and that would primarily fall into the categories of either domestic violence or hate crimes, and so a family member could go directly to the court.

You don’t need a lawyer there are websites available, you can just google Extreme Risk Protection Orders Washington State and find your way to a website that will kind of take you through the steps and what that looks like. But in addition to family members being able to make these kind of petitions, we’re really excited because law enforcement directly can do that. And often it’s law enforcement that really knows where the danger is. And then they can make those petitions and actually in a much more controlled and safe way, go and retrieve these guns, rather than getting a 911 family disturbance call in unbeknownst to them walking into, I don’t know, a firing range.

So we’re really, really excited about the fact that this not only helps to keep the community safer, maybe particular targets of the violence safer, but also law enforcement safer. We recently just had a workshop, a two hour workshop at the Seattle City Hall. And the experts there explained to us that really what is amazing is that what you don’t hear in the news, for example, the week right before that workshop, they went in and seized kind of an arsenal, from someone who was a white nationalist who was making some very, very dangerous threats online. And they were able to go in and pull all of those weapons away from him just the week before our workshop, that will never make the news, because nothing happened.

So It breaks my heart, that I have to wait until there’s a massacre. Before you know, we’re starting to pay attention, but hopefully now, the tide is turning. And we’re starting to see that these kind of laws are passing across the country. And I’m hoping that Seattle and Washington state can really be an example to others, to show them that this really can be done. They can be done effectively by the courts, implemented by police and keep people safe.

Yuko Kodama 2:55
Was there a time when there was kind of some hubbub about how it was going to be implemented concerning the resources that it takes?

Trese Todd 3:03
Well, one of the wonderful things about living in Washington is that we’re sort of out ahead of the curve. We passed what we call firearms surrender provisions within protective orders for domestic violence cases long ago, probably 20 years. So there was a lot of that discussion when this unit was being formed when it only applied to domestic violence orders. And so there was a lot of discussion of, and it took a lot of work to how are we going to get together with where do we store these guns and make sure they get returned if a judge says they have to be returned. And you know, there’s just a lot of procedures and policies and protocols that law enforcement agencies and prosecutors offices have to kind of figure out [like] who’s going to serve them who’s going to tell the police officers they have to go serve them, How are we going to get the details of where the guns actually are? Because it’s easy for someone to say I gave it to my brother or yeah, I used to have one but you know that somebody else like that ya dah dah dah. It’s just a constant ya dah dah.

And now we’re able to say, wait, we know exactly that this gun is in the ottoman, in the living room, can we, you know, it would be much better for you if you just surrender it to us now, can we get that now. And that is so powerful to be able to remove such a deadly, lethal weapon from a situation where there is a crisis. Usually when someone is asking, somebody’s in danger, somebody’s a threat, we really need to do something about this, they need that done within 24, 48, 72 hours, not a couple of months down the road. So, so it is that getting the procedures and the units in place that the immediate service, immediate implementation. And then if someone says, you know, I don’t have them, now actually prosecutors can then get a search warrant and go look for them. And if there’s violations of these orders, then people can ultimately go to jail for violating them.

So we’re finally getting some sort of real teeth to these borders. And I believe that these Extreme Risk Protection Order you’re probably, in my opinion, the most real time life saving provision we could possibly have. But they’re not very useful unless there’s an actual Enforcement Unit. And so our focus now is to make sure that the whole state is educated about Extreme Risk Protection Orders so that in every region of our great state, people can have this kind of protection.