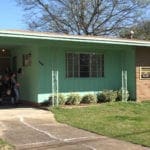 The NAACP’s first Mississippi field secretary, Medgar Evers was a civil rights leader who organized voter-registration efforts, economic boycotts, and investigated crimes perpetrated against blacks in the south. He was born on July 2nd 1925, and was assassinated at his home in Jackson Mississippi in1963. A group of participants from Project Pilgrimage listened to civil rights foot soldier, Bob Zellner speak about Evers in Jackson.

Project Pilgrimage is a Seattle based community building and educational immersion program focused on stories from the civil rights movement.

The deadline to apply for the fall 2019 pilgrimage is July 12th.

Special thanks to KBCS Producer, Ruth Bly for this story.

0:05
Th e NAACP is first Mississippi field Secretary Medgar Evers was a civil rights leader who organized voter registration efforts, economic boycotts and investigated crimes perpetuated against blacks in the south. He was born on July 2 1925, and was assassinated at his home in Jackson, Mississippi in 1963. A group of participants from Project Pilgrimage, a Seattle based community building an educational immersion program, listened to civil rights foot soldier. Bob Zellner speak about Evers in Jackson, Mississippi.

0:39
Medgar Evers was a great example of movement lore. Medgar Evers was cussed every day by Roy Wilkins, who was head of the NAACP. Roy called Medgar every day and said Medgar, I’m going to fire your *$#*, working with those young people, going on those marches, going on those sit-ins. You’ve got to cut that out. Don’t you understand what the NAACP is about? We’re a legal organization. We work years and years to set legal precedents. And what happened after Medgar was assassinated right there on that porch right there. And the bullet went through the house, all the way to the kitchen, hit the refrigerator, bounced off, went through a watermelon and landed up in the sink. And Byron De La Beckwith (Jr) from Greenwood was right over there he shot him, left the rifle right there with his fingerprints all over it. Everybody knew from the beginning who killed him. When Medgar was assassinated, it became one of the greatest NAACP martyrs of all time. So that’s the way the movement works.

1:50
It’s the difference in the kind of work that Medgar was dedicated to do here, because he knew that the young people, that SNCC and all the other people, that’s the people he was going to work with. He was one of the first field secretaries of the NAACP. The reason he was appointed as a field secretary to organize was that the NAACP was under a lot of pressure, because they were legalistic.

2:15
And they did tremendously good work. But when you study all of the Civil Rights Organizations, NAACP, Congress of Racial Equality, Student Nonviolent Coordinating Committee, Urban League, all of those organizations, these are the national ones, they all had their role. And the students were constantly putting pressure on the older organizations – “It’s a new age, it’s a new day, we have to go out and directly confront this situation”. So I’m just telling you the irony of Medgar and Myrlie Evers being the great heroes and martyrs.

2:56
It was the same thing with Robert Williams, does anybody know about NAACP branch President Robert Williams? Robert Williams was from Monroe, North Carolina. And Robert Williams believed that when they had to, the local community should arm themselves, train themselves for community defense, and use the guns when and as necessary. And he was cussed every day by the headquarters of NAACP. Now, Robert Williams was totally different situation. If Robert Williams had been murdered, he would have been a great martyr of the NAACP and one of the greatest leaders. But he was forced to leave not only the NAACP, he was forced to leave the country and go to Cuba. And it was years and years before he came back to Detroit, and took up his position. He and his wife and other people leadership in the movement. So there’s always these contradictions. Anne Moody, one of the great classics of American literature, ‘Coming of Age in Mississippi” and Anne Moody, like James Forman and a lot of other people in the movement, she was driven crazy by this system, and went through periods of genuine insanity. It’s amazing that any of us even survived those days. So it was just accidental that I was able to survive and a lot of other people there, but there’s very few people left who were on the front lines today. So that’s why we have a responsibility to tell the story. You have a responsibility to pass on the story and carry on the struggle.