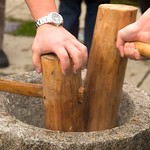 What’s the story behind mochi – the chewy, sticky treat that’s served up on New Year’s Day in Japan?  The tradition of pounding mochi, or mochitsuki is a dying craft in Japan, but it thrives in our region.  Listen to this highlight of Bellevue, Washington mochitsuki artisan, Shoichi Sugiyama.

You’re listening to sweet rice being pounded with heavy wooden mallet and a large stone bowl. This is mochitsuki, mochitsuki artisan, Shoichi Sugiyama of Bellevue Washington calls out the rhythm as 1 to 3 people take turns hitting the sticky mound of sweet rice. Rhythm is critical because Sugiyama turns and moistens the mochi with his hand on the upbeat. Missing a beat could lead to serious injuries. Eating sweet rice on New Year’s Day as a central part of the festivities. Here’s Sugiyama describing the significance of mochi during the season.

Speaker 2 0:55
Mochi symbolizes gratitude as the year closes and it also marks the hopeful start of the new year.

Host 1:03
Mochi is symbolic of this major holiday much like turkey for Thanksgiving. Many Japanese go to great lengths to ensure that mochi is eaten on New Year’s Day.

Speaker 2 1:14
When I first came to Bainbridge Island, I learned about the Japanese who were sent to the incarceration camps during World War Two. I found out that they pounded mochi in the camps. They must have gotten a hold of sweet rice somehow.

Host 1:30
Meanwhile, Sugiyama reflects back to his childhood during tough times in post war Japan, as his family still found the means to make mochi for New Year’s.

Speaker 2 1:43
Mochi rice is expensive, and we didn’t have much money growing up, so we used half regular rice and half mochi rice for New Year’s. It wasn’t as stretchy but it was mochi to us. We used all mochi rice as the economy got better

Host 2:02
Today you can buy all kinds of mochi wrapped in plastic at Asian groceries. But Sugiyama looks back at what it was like to grow up crafting this treat.

Speaker 2 2:13
When I was little, I was given the job of watching the fire used to steam the rice. Then in elementary school I was allowed to use a light mallet for a few short swings, since I wasn’t strong enough for the heavy one. Later in middle school, I got the hang of pounding the mochi with the large mallet. Finally in high school, once the rhythm became second nature my dad let me flip the rice. This is why I can oversee mochi pounding from start to finish these days. You learn from years of experience. It’s not something that you can pick up in a day since you can only practice once a year.

Host 2:48
While many families practice this tradition annually. each household had their particular style.

Speaker 2 3:01
My dad said we should have fun when we pounded mochi. He used to say that if we have fun others will be drawn in. My dad was so skilled in turning the mochi that it looked like it was dancing in the stone bowl. It was an unforgettable site that I’ll remember forever.

Host 3:20
Sugiyama is a former firefighter from Quokka in southern Japan. 17 years ago, he attended what’s now called the Bainbridge Island Mochitsuki festival. It’s an annual event hosted by the Bainbridge Island Japanese American community. It’s open to the public. He was reminded of his family’s traditions he left behind and asked if he could give a hand

Speaker 2 3:39
I said, Would you mind if I joined you and flipped the mochi a little then people just start getting into it. Apparently, I had a new energy to the event. So from then on, they expected me to be back every year.

Host 4:04
This year will be Shoichi Sugiyama’s 15th year leading Bainbridge Island Annual Mochitsuki Festival. With the growing popularity of this event Sugiyama anticipates the rhythm and momentum is built over the years will invite future stewards of this long standing tradition.