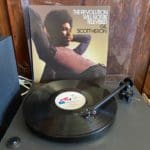 The great American poet and jazz musician, Gil Scott-Heron, died today in 2011. He was 62 years old. As a boy, living with his grandmother – a civil rights activist, because these legacies can and should be passed down – he was introduced to the poetry of Langston Hughes and began to play piano. Best known for the peerless anthem “The Revolution Will Not Be Televised,” his cleared-eyed lyrics continue to challenge and destabilize racial hierarchies in profound ways.

With today’s SpaceX launch, the first crewed rocket to take off from American soil since Scott-Heron’s death, I can’t help but think of “Whitey on the Moon.” It’s a blunt expression of the pervasive inequality and racist violence that cripples this country; it’s a cudgel of truth: “A rat done bit my sister Nell / With Whitey on the moon…/How come there ain’t no money here? / Hmm! Whitey’s on the moon.”