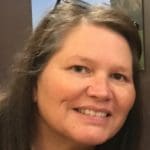 Carolyn DeFord is an enrolled Puyallup member and is from Nisqually and Cowlitz descendants. Her mother, Leona Lee Clare Kinsey has been missing for over 20 years. DeFord shares what she’s come away with from this tragedy with KBCS’s Yuko Kodama

Carolyn DeFord will be speaking at University of Puget Sound campus on Monday May 2nd at 1 pm to a live and zoom audience.

You can register to attend here

Special thanks to Jesse Callahan for help with editing this story.